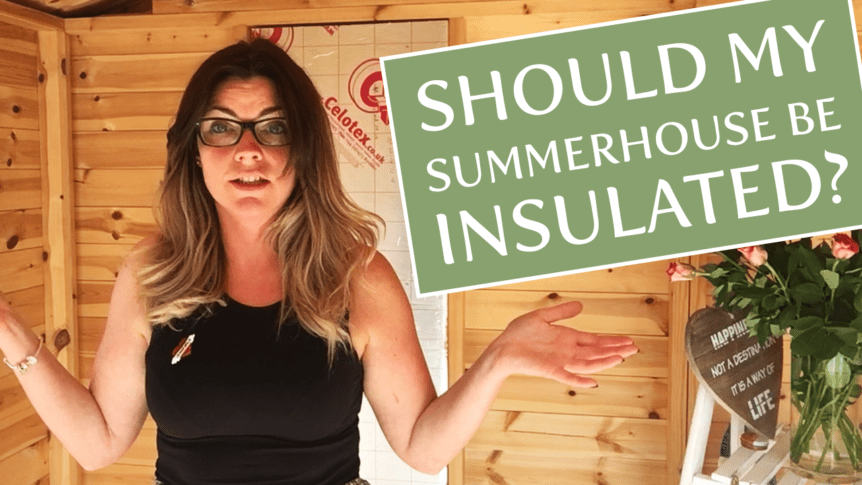 You want to be able to use your Summerhouse all year round right? Well… as much as possible, weather permitting.

So, is it a good idea to insulate this wonderful timber building?

I would say no, it’s kinda counterproductive. Why do I think this? Here’s a wee video explaining all. You might still want to insulate it anyway, but then again, after hearing what I have to say, you might not!

“Should I insulate my Summerhouse?”

This question is something that kind of doesn’t really agree with me.

Insulating a summerhouse is counterproductive.

A summerhouse is single glazed, and the majority of the panels are made up of windows and doors.

If you’re insulating your summerhouse, the majority of that extra added value in heat and efficiency escapes through the windows and doors, so it doesn’t seem like a feasible idea.

I would opt for the cabin specification, where the windows and doors are all double glazed.

However, the cabins are expensive, so you’ve got to weigh up those two factors.

I would say that yes, it does add some value, but not as much as you may be anticipating.

To get additional value from the heat that can stay within the building, I would add in electricity and some form of heating.

Most of our customers tend to go for underfloor heating, which seems to be the most cost effective, it’s easy to run and it doesn’t cause any limited space factor.

The other thing that people go for is a wood burning stove.

These are excellent for this type of building, literally stick it on for 20 minutes in the morning and that’s you throughout the day, all nice and cosy.

The insulation factor, as I say, doesn’t really agree with me. However, it is something that people might like to upgrade to at some point, and we’ll show you how to do that in our ‘how to’ videos to come.