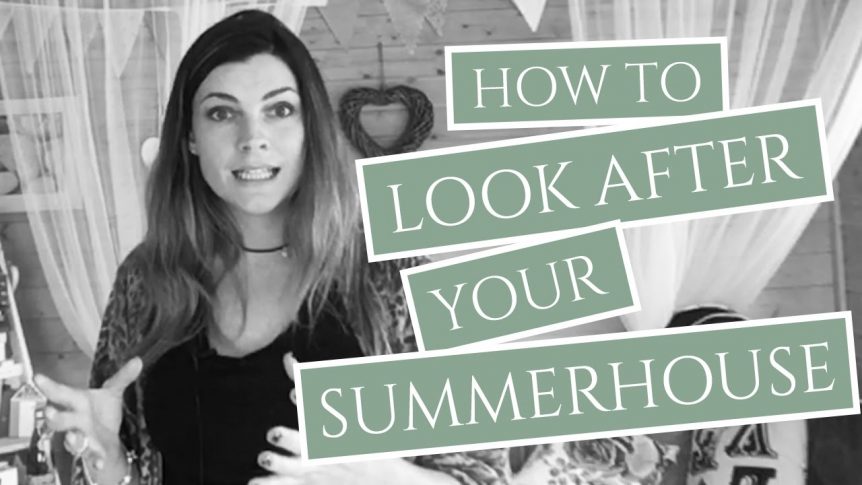 That’s right… our Summerhouses are built to last! But, only if you remember to keep up with the aftercare.

If you really want your Summerhouse to stand the test of time and still look as amazing in a few years as it does now, then there are some things you need to do.

Want to know more? Check out this short video I made explaining all about it…

If you have just bought a Gillies and Mackay Summerhouse, you should be considering the aftercare for that Summerhouse and how you actually have to look after it.

The maintenance of your Summerhouse is fairly straight forward.

There are just a few things that need importance put on them, and that is:

The treatment is either the Sadolin Superdec or the Sadolin Quick Dry, and that needs to be applied as per the guidelines on the tin, which is every three to five years depending on how exposed your garden is.

So that’s the first thing that you need to make a priority for your Summerhouse.

The other thing is airing the summerhouse.

Because the building is single skinned, it doesn’t have any insulation on the inside. So, when the temperature rises and drops and all the glass that’s in that summerhouse, a huge amount of condensation can build up if the building isn’t aired properly.

Make sure, especially in the winter months and when the temperatures are fluctuating, autumn and spring in particular, that you’re opening the windows and doors and allowing the whole building to breathe.

By doing this, you’ll combat the condensation build up, and any moisture buildup in the timber. This will stop it from going mouldy. The other thing you can do is you can put in moisture extractors. They’re just little tablets which you can pick up from the normal supermarkets.

Another thing to note is that Summerhouse doors will contract with the weather and to reduce movement we advise you treat/paint the doors internally as well as externally.

By coating them fully (all around the sides too) you keep the majority of the moisture out. There may still be a little bit of movement, because it is timber and that’s what timber does, but by treating the whole entire door then you can sort of limit that down to a very minimum.