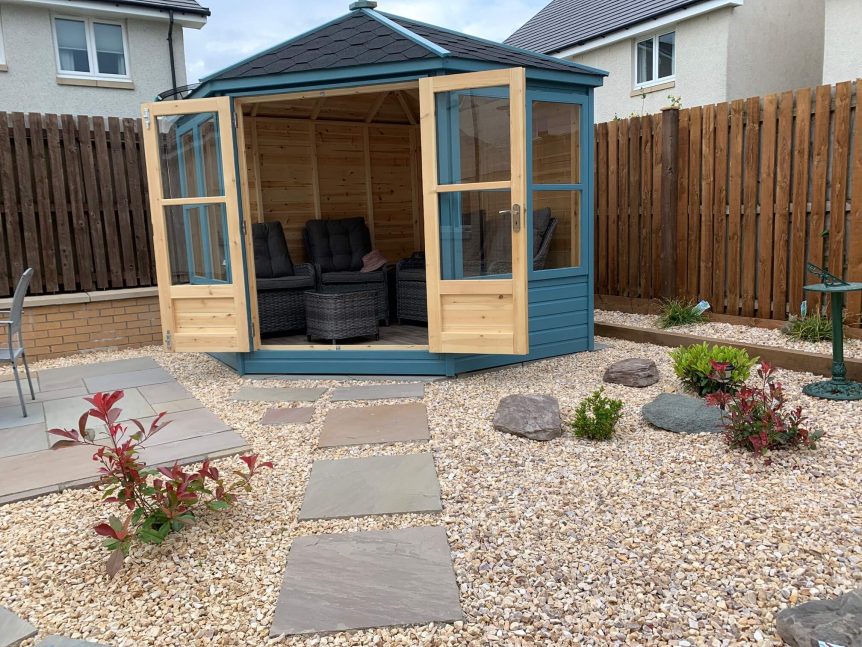 So, you’ve decided that it’s time to transform your Garden into a hygee haven. It’s had its fair share of laughs, a few BBQs, a party or two. But it’s time for something more; something truly charming that captivates everybody.

And a Summerhouse certainly fits the bill….

However, before you get stuck into planning, there’s a few things you should be aware of cost-wise.

A Summerhouse is a large project, and it will require more work than just installing the building. Of course, there will be costs associated with these extra words.

In order to prevent any massive unpleasant surprises, we think it’s best to layout the costs that will come into play when ordering a Summerhouse.

So, in this blog we’ll help you understand not only what a summerhouse will cost, but what the associated project costs will be. That way you can budget for the entire installation, and not just the building itself.

What’s the cost of a summerhouse?

Of course, the main cost in a Summerhouse project will typically be the Summerhouse itself!

Here at Gillies and Mackay, our Summerhouses broadly range from £3,000.00 to £6,000.00, and if you’re a Scottish Sheddie, you can view some reviews of other companies below by our very own Shedi Masters Nicola and Cara:

What’s the cost of a summerhouse base?

We can’t speak on behalf of other Summerhouse companies, but Gillies and Mackay do not construct the groundwork/bases for any of our buildings in any capacity. Ergo, the base is a massively variable cost that you need to take into account when planning.

At Gillies and Mackay, our Summerhouses need to go on a sturdy, solid base (they weigh like 2 tonnes!), which almost always present themselves in the form of a fully slabbed base.

The costs of slabbed bases are massively interchangeable. It depends on the size of the slabbed base, current site conditions and levelness. Plus what company you go with, and the cost of materials when you proceed (it’s insanely volatile, folks).

Basically, we have absolutely no authority to give even a ballpark figure.

What we do know, though, is that base work costs are significant enough that you ought to be aware of them before proceeding with an order for a Summerhouse building.

In terms of companies that will always supply a bloody good slabbed base for you, look no further than Homescape, Gardens Galore and Tayside Gardens.

These three are tried, tested and true and always do a cracking job for our Tayside #Sheddies. Due to the costs involved in a base (and these costs are justified), we would always recommend seeking a quote first for the completion of groundworks prior to doing anything drastic.

It’s best to know of these things before, rather than retrospectively.

Brilliant, that’s the two absolute necessities out the way. You need a summerhouse (of course) and a base, so these are essential costs that you need to budget for.

Now let’s explore some optional costs that aren’t essential to #ShedLife, but are duly welcomed nonetheless.

What is the cost of a summerhouse stove?

For those that are intent on going the full shebang on the hygge haven, cosiness is key. With this in mind, there’s one thing that does the job better than others: a lovely stove.

Installing these beauties is no easy task and requires a professional. As such, Gillies and Mackay (and we imagine many other Garden building companies) do not do this internally.

Our personal recommendation is the wonderful Carse County Stoves who provide a massive range of products.

Again, the price of a stove depends massively on what you are opting for, and as such is worth considering in terms of your full project.

What is the cost of summerhouse electrics?

Ah, electricity. We find that there are two types of Summerhouse users:

The vast majority of people who are installing electricity are doing it in order to have full WiFi access, a TV; all that jazz.

If that is your vision – and a good one it is – then you need to look into getting an electrician to do the work.

If not, happy days as well! We understand that it is an important priority for multiple people. As such, we recommend accounting for its costs.

What is the cost of designing your summerhouse interior?

A famous philosopher once said:

“there’s no point having a stove and electrics in your summerhouse if you’ve got nowhere to sit.”

(Okay, that might have been Cara, but we like to think of her as a shed philosopher, and she’s certainly famous).

Sobering stuff. Indeed, those words still ring true 2400 years later – the furnishing of your summerhouse does add up!

Whether it’s sofas, chairs, tables, laminate flooring, paint for the interior – all of these things that contribute to the look of your summerhouse quickly amount.

We realise that the list is getting a little long. However, it’s important our #Sheddies are uber prepared in advance of beginning their wonderful project.

Ready to get your summerhouse?

So #Sheddies, this should have cleared some things up. It will help you prepare for your summerhouse journey.

We hope you’re super excited. To recap, we’ve looked at

We understand: there’s a lot of things that go into it and there’s much to consider.

But hey, if you’re going to do it, it’s worth doing it right.

It goes without saying that stoves and electricity are completely up to you. The imperative here is basework (and of course the building itself!).

That’s all for now folks. Cheers!