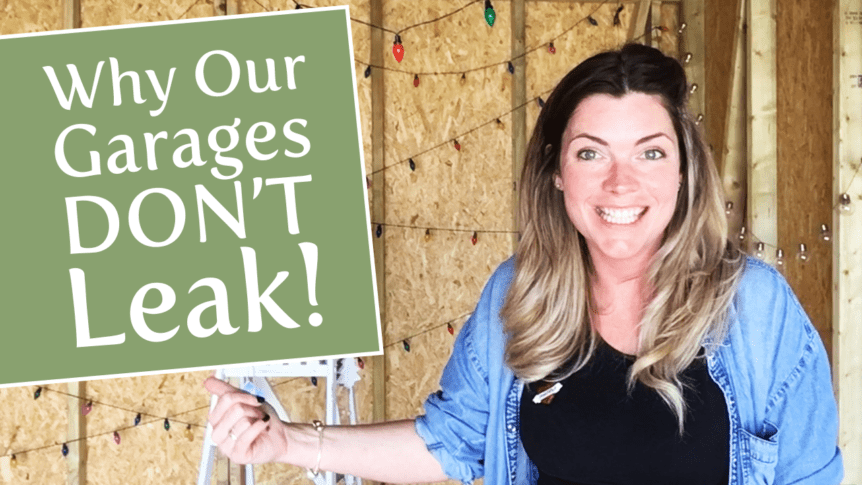 A leaky garage is not what you want when you’re little baby (your car) is stored inside… the whole point of a garage is to keep everything nice and dry and protected from the rain right?

Good job then that our awesome Garages don’t leak! Why? Well, that’s easy, because we have THE best Garage specification in the world – FACT!

Check out this wee video to see what I mean.

This time last year we had a real issue with our garages… they were leaking.

The reason they were leaking was that they were single skinned buildings, and the water was coming right through the weatherboard into the inside of the garage.

There was nothing we could do to stop this from happening.

It seemed to be the longer the panels that were the most affected. It was drawing moisture through where the framing was, and there were loads of different issues that we addressed. We thought we could solve the problem by things like re-sealing the joints, adding in guttering, repainting them, but nothing worked.

It already obviously has its wall, so what we were doing was putting a secondary wall on top of that and creating a cavity. That stopped the outside wall water ingress getting through to the inside of the actual garage.

After a lot of expense of doing all of that, we decided that we needed to change the specification.

It was happening in about one in every 30 garages. So, enough was enough, we had to think of a solution, come up with it, cost it and get it out there.

The cost implication was the biggest fear because obviously, that was the thing that could put customers off. It was hard accepting that it was going to cost a lot more.

Our structure now for garages is 19 mm thick tongue and groove redwood weatherboard (just as it is on all the other buildings), tanalised (so it’s pressure treated), with a 22 mm cavity, then there’s a breather membrane, a 9 mm OSB board sheeting, followed by a 95 x 45 pressure treated frame that comes as standard.

That framing size changes depending on the size of the building, but usually a minimum of 95 x 45.

We now have buildings that are completely watertight. The water will still penetrate through the external boards, but it has a cavity, so all the moisture can escape and it’s not going to penetrate any further through to the inside of the building.

Whatever you store in here will be nice and dry, you don’t need to worry, and it’s a much better construction.

It’s actually what we use for the wall makeup of the cabins before they get the insulation and lining on afterwards.

It’s a tried and tested, structurally sound, fantastic makeup for a building to keep all the Scottish elements out from the inside and keep all your stuff nice and protected.

Hopefully, that explains why we had to upgrade, how it costs more, and what you can expect if you want one of ours. It’s going to do the job right.